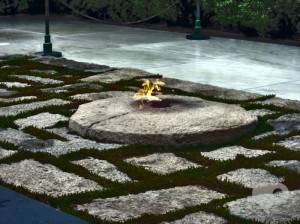 The accompanying image is a photograph of the eternal flame that marks the grave site of the late president John F. Kennedy. John Kennedy was the thirty-fifth president of the United States. He was assassinated in Dallas, Texas on November 22, 1963.

That date is so engrained in the psyche of Americans of my generation that most of us remember exactly where we were and what we were doing when we heard that John Kennedy had been shot.

After a nationally televised state funeral and procession, President Kennedy was buried in Arlington National Cemetery, on the bank of the Potomac River in Arlington, Virginia.

This article isn’t about John Kennedy, though. It is simply about gratitude. John Kennedy said this, As we express our gratitude, we must never forget that the highest appreciation is not to utter words, but to live by them. I decided yesterday that from now on I would be grateful for every new day I’m given in this life. My challenge now is to live up to Kennedy’s words and live each day as if I am.

I challenge you to do the same.

This site uses Akismet to reduce spam. Learn how your comment data is processed.