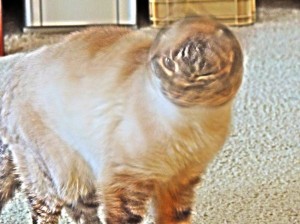 I haven’t written for this blog in months. I really haven’t done much these last few months but visit doctors and ER rooms. Mostly I’ve dealt with medical problems. Some of them have finally been diagnosed, but we are still testing for others. Most of the time I’ve just felt muddled and befuddled.

Since I am starting to feel a little better, I thought I would try to start writing regularly again. I have lots to write about the last few months. I discovered Beaufort, SC, which is now one of my top five favorite cities. I bought a new car. I’ve been treated by some great heath care professionals and some not so great. I think I figured out why junkies shoot heroin. I got a new camera, and I am thinking of starting another blog to discuss it.

I used the new camera to take this photo. It is a picture of Coco, our twenty year old mixed Tabby and Siamese. It is an accidental shot. Coco shook her head precisely when I released the shutter. The shot captured the blurred motion as she shook her head. Pretty cool.

This site uses Akismet to reduce spam. Learn how your comment data is processed.